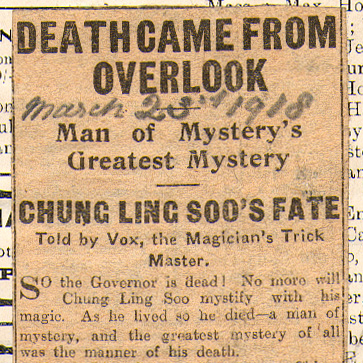 So the Governor is dead! No more will Chung Ling Soo mystify with his magic. As he lived so he died – a man of mystery, and the greatest mystery of all was the manner of his death. 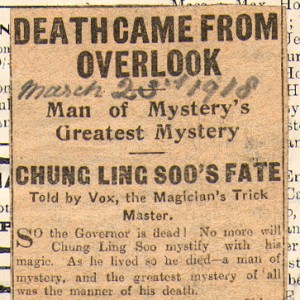 Chung Ling Soo was no more a Chinaman than I am, and I hail from Bonnie Dundee. Indeed he had nearly as good a claim to rank as a Scott, for his mother was from Inverness. Fate decreed there should be born in New York a child who would be known to the neighbours as Funny Little Robinson. Fate also decreed that Robinson should go before the footlights and at an early age should join a minstrel troupe.

The strategy by which he found his way to public favour ranks as one of the greatest feats in pure audacity in the annals of the halls. Year after year the most popular entertainer in America was Ching Ling Foo, a genuine Chinaman, who earned an income of Oriental magnificence. There came a moment in the career of Ching Ling Foo when the public appeared to tire of him, and at that crucial moment Robinson, with the full war paint of the East, appeared on the scene, and, claiming to be the only genuine Chinaman, practically hounded Ching Ling Foo from the city.

Whether or not Chung Ling Soo inherited from his Highland mother something of that second sight which we know is found among the dwellers of our glens, I do not know, but what I do believe is that if ever a man felt the chilly breath of the Old Reaper on his cheek when to all the world he had years of vigorous life ahead that man was Chung Ling Soo.

That last week at the Wood Green Empire was a living nightmare to me, for coming into such close contact with “the Governor,” as he was affectionately known to his assistant, I could not fail to recognise the gloom replacing his usual confidence. At every performance his attitude, it seemed to me, was that of expectation. But what he expected I never guessed – till the end. The fatal night came, and at the first house Chung Ling Soo drew a record crowed. The piece de resistance, the “gun stunt,” came off with expected eclat, and the audience left highly satisfied with our bill of fare.

In this turn Chung Ling Soo Picked out two bullets, which he invited the audience to mark. The marked bullets were returned to him in a cup, and before the eyes of the spectators rammed down the muzzle- loaders used. The guns were then fired at the Governor, who caught the bullets in a chinaware plate, and returned them for the inspection of the people who marked them.

In reality, of course, the guns were faked guns. The bullets Chung Ling Soo returned were the identical bullets marked, but not the bullets which went down the gun. These were dropped down the muzzle, and fell into a little pocket well past the place where the propelling charge was situated. But it must be remembered that every time the guns were fired the death charge was there, and only the most careful manipulation prevented a tragedy. Naturally, in such a matter the Governor took full control of the guns, and saw the wadding and bullets removed.

At the second house he was forced to leave his preparations to the last possible moment, and my surmise is he overlooked the necessary clearing out of the guns in the hurry of making up time. Not even when the guns were turned on Chung Ling Soo did he or his audience know what the sequel would be.

Two rapid explosions, a cry, “Oh, my God!” a heavy fall. Then silence swept through the hall, broken only by the gasps as the prostrate figure fought for breath.

When I got to the Governor he was bleeding terribly, so badly, indeed that we dared not to move him. Three doctors were on the scene, and did everything humanely possible. They pumped oxygen into him, and when they discovered his case hopeless – he was shot through the lung – they managed to ease his sufferings, and he slipped into his last sleep. So passed Chung Ling Soo, the man of mystery.