Houdini’s Will. “Handcuff King’s” Secrets to be Destroyed. 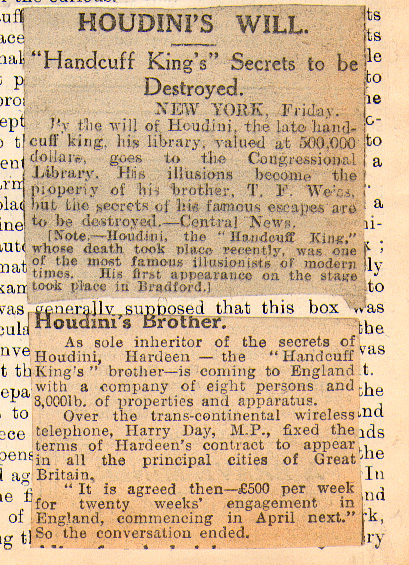 “Handcuff King’s” Secrets to be Destroyed.

NEW YORK FRIDAY – By the will of Houdini, the late handcuff king, his library, valued at 500,000 dollars goes to the congressional Library. His illusions become the property of this brother, T.F. Weiss  but the secrets of his famous escapes are to be destroyed, Central News.

[Note- Houdini, the “Handcuff King”, whose death took place recently, was one of the most famous illusionists of modern times. His first appearance on the stage took place in Bradford.]

As sole inheritor of the secrets of Houdini, Hardeen- the “Handcuff Kings” brother- is coming to England with a company of eight persons and 8,000lb. of properties and apparatus.

Over the trans-continental wireless telephone, Harry Day, M.P., fixed the terms of Hardeen’s contract to appear in all the principal cities of Great Britain.

“It is agreed then – £500 per week for twenty weeks’ engagement in England, commencing in April next.” So the conversation ended.