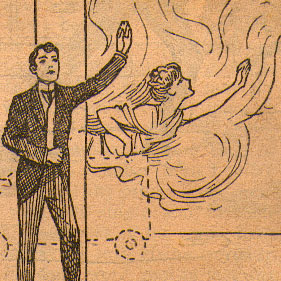 In this article I wish to show my fellow who are interested in conjuring how to emulate the above illusion. The effect is as follows:

When the curtain rises the performer is seen seated close to the background. Suddenly a cloud of vapour issues from his side, then in the midst of this is seen the form of a girl. She then floats down to the ground, and is seen to be as solid as any one of the audience. Together with the illusionist she preforms a few tricks, then suddenly, with a cry, begins to melt away until nothing is left.

Now for the secret. In the first place, the screen which forms the background is a dead black A in the diagram. About 3 ft. or 4ft, away is a second black screen, B, which is half as long as the first,
A. Behind this a small kettle at such a height that if the performer stood bt it it would be level with his chest (as in D). A small truck, covered with black cloth, is also behind the screen A. 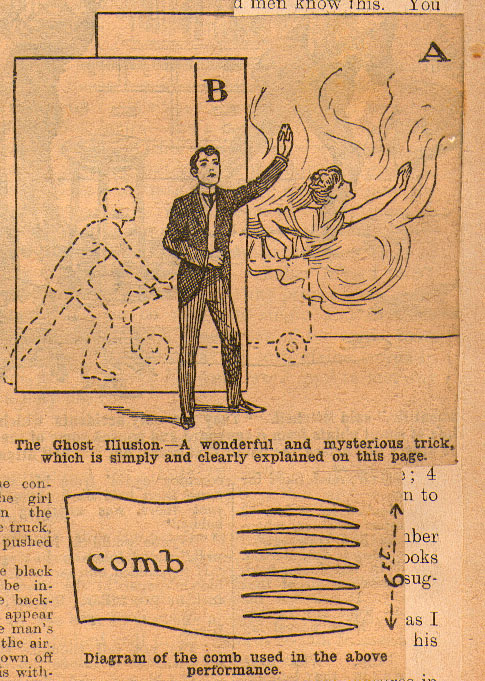 The method of working it is as follows: The performer stands with his side touching the end of screen B. His assistant places the kettle on a stand just behind the screen end.
One can easily see now that the steam as it spurts out will appear to issue from the conjurer’s side. The girl assistant lies on the sloping roof of the truck, and is then slowly pushed out.

Seeing that the black truck will still be invisible against the background A. she will appear to float out of the man’s side and rest on the air.
She then steps down off the truck, which is withdrawn.

The last vanishing effect is the easiest of the lot. The girl merely stands still close to the real background A, and an assistant gradually pushes “the comb of black material in front of her until she is covered. The curtain then falls slowly.