Charlie Chaplin On The Secret Of His Popularity. 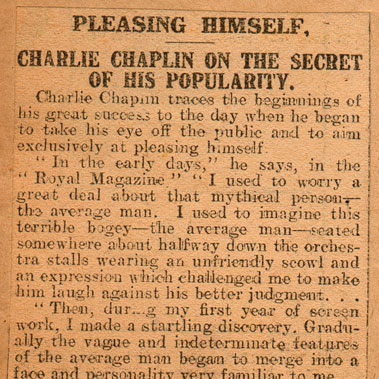 Pleasing Himself, Charlie Chaplin On The Secret Of His Popularity.

Charlie Chaplin traces the beginnings of his great success to the day when he began to take his eye off the public and to aim exclusively at pleasing himself.

“In the early days,” he says, “in the Royal Magazine. I used to worry a great deal about that mythical person— the average man. I used to imagine this terrible bogey —the average man— seated somewhere about halfway down the orchestra stalls wearing an unfriendly scowl and an expression which challenged me to make him laugh against his better judgement…

“Then, during my first year of screen work, I made a startling discovery. Gradually the vague and indeterminate features of the average man began to merge into a face and personality very familiar to me.
The average man, in short, whom I had feared and nervously sought for in so many audiences, was myself.”