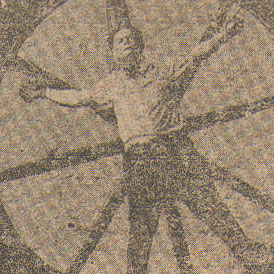 Houdini- The Mystery-Man By David Gow Editor of “Light”

“Some people say, Mr Houdini,” I remarked, “that some of your feats are so impossible of explanation along ordinary lines that you are really a medium and are assisted by spirits.”

The great magician, with whom I was spending an hour by his invitation, smiled at my remark, particularly when I added that even in his escape from the tank of water, which I have witnessed before I came, I could see no evidence of anything but a remarkably clever feat of conjuring. 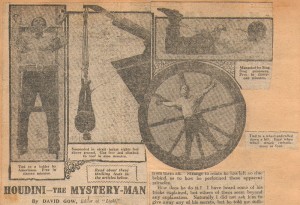 “Well,” he said “I have heard stories about my body being de-materialised to enable me to get out of prisons, tanks, coffins and boxes, and then put together again. I make no claims to any supernatural power.  Supernormal? well, I suppose as my powers are above the normal, they can be so described. Certainly ‘supernormal’ seems to be
the word.

Here is a man who has been stripped nude, thoroughly searched by physicians and locked in the strongest prisons, without confederates, and possessing certificates to the effort from the shrewdest police officers of the world, and yet he has escaped in a few minutes. Every kind of handcuff has been tried upon him. Mechanical geniuses have competed and invented manacles from which he has freed himself: he has been put into a boiler, riveted up by the makers, and has got out again; handcuffed and put
into a tank which has been clamped down by mechanics in the presence of detectives, scaled and dropped to the bottom of the ocean, yet a few moments later he has swum to the surface.

He has been confined in sealed paper bags, strait-jackets and burglar-proof safes, and escaped from them all. Strange to relate he has left no clue behind as to how he performed these apparent miracles.

How does he do it? I have heard some of his tricks explained, but others of them seem beyond explanation. Naturally I did not ask him to give away any of his secrets, but he told me sufficient to lead me to think that Houdini is almost a mystery to himself as to anyone else. He is a combination of brain and brawn.

He reads character instantly, and claims that he often knows the contents of his letters without opening them. He gave me an example of that while I was with him, allowing me to take from the postman a letter addressed to him and to read it myself. It was clearly from a complete stranger, but he knew what it was about.

Now I have had the experience of other conjurers possessing these strange powers, and it gave me an idea, viz that conjuring and clairvoyance and other psychic powers may go together.

The conjurer, by incessantly developing his gifts, at last reaches a stage at which they pass imperceptibly into powers of what we may call a superhuman kind. I have previously seen instances of this, where the performer did things which mystified himself as much as the spectators.

Then Houdini told me another thing that made me think, “In my feats,” he said, “I have to wait for a particular moment. Before it arrives or after it has gone I can do nothing. It is something that I cannot explain myself. I take a big risk every time. I must never miss my moment.”

That gave me a hint. Houdini is probably aided by mysterious natural laws which none of us quite understand. He may be what is called a “psychic,” exercising strange powers of his own spiritual powers, if you like.

However, that is only my theory.

This article was writen by David Gow, a british Spiritualist and editor of the Spiritualism Journal ‘Light’. You can see Houdini’s reply to the article here https://www.magicians-scrapbook.co.uk/2011/10/14/my-secret-power-by-houdini/