Secrets of Magic by Jasper Maskeleyne 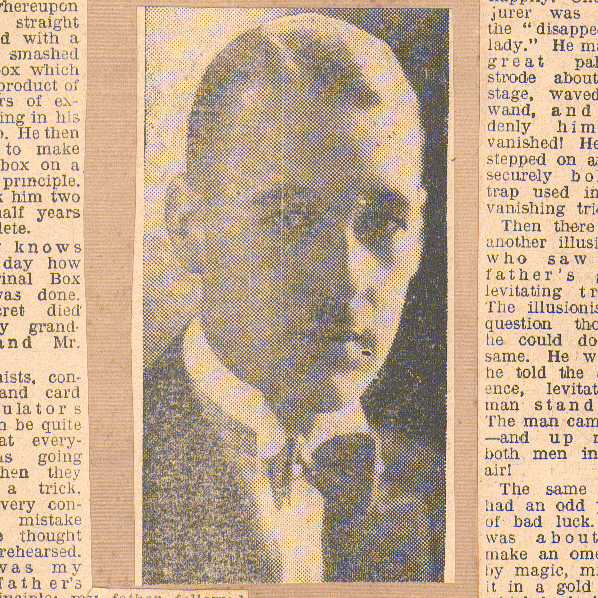 My Grandfather was a young man when, in their triumphal progress through the provinces, the Davenports, the famous “mediums,” visited the Town Hall, Cheltenham. Like everyone else, he went to see the rope-tying phenomena, and – unlike most – he came away with a pretty clear idea as to how the wonders were accomplished.

Chance had a little to do with this; sharp eyes and a natural aptitude the rest.

The séance was held in the afternoon, but all light – fatal to so many “mediumistic” reputations – was excluded. My grandfather was upon the stage as one of the representatives of the audience when a piece of drugget fell from one of the windows of the cabinet used by the Davenports, letting a ray of sunshine in to the cabinet – and my grandfather in to the secret.

Having witnessed this, he honestly and openly denounced the impostors, and from this point took a new departure, being possessed of an intense desire to expose them. He then started his reproductions of so-called spirit-media. 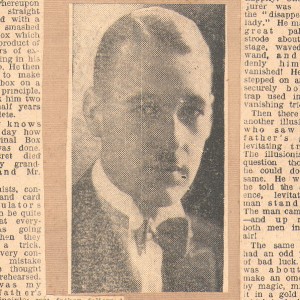 In this pursuit his former amusement (conjuring) became eminently useful; and to carry the idea out to the fullest extent he secured the cooperation of his friend, Mr .Cook.
This is how the firm of Maskelyne and Cook was started.

My grandfather and Mr. Cook toured the provinces for a few months and then came to London, and on April 1, 1873, the show opened at the old St. James’s Hall. The spiritualists of the day were good enough to be facetious about the date; they said it was the most appropriate, and prophesied disaster for the enterprise. The wish, of course, was father to the thought.

As a matter of fact, my grandfather had not contemplated playing for a long run in London. He had an idea that if he could keep going for a short time he would return to the provinces with the advantage of the London reputation behind him. But London would not let him go.

The entertainment was so successful that three months after it had been running my grandfather took a long lease of Egyptian Hall, Piccadilly, and there he remained till the lease ran out, in 1905, when he moved to St, George’s Hall.

The chief difficulty at the old Egyptian Hall was the lack of space. I do not think that there were more than three feet to “play with,” and there was scarcely any room behind the back cloth. In spite of these drawbacks my grandfather contrived to produce the long series of illusions which have made his name so famous.

The two tricks that made my grandfather famous were Psycho, the whist playing automaton, and the Box Trick. Now Psycho was – or still is (as we still have him at our stores, but cannot use him as his works are all worn out) – a mild looking Hindoo figure some 22 inches high, seated cross-legged on a box , which rested upon a pedestal of clear glass.

This glass was placed upon a tripod in the centre of the stage. There was no connection between him and his supports, and all were submitted to the closest examination by the audience before the movements of the figure commenced, a number of gentlemen surrounding the figure while he played a game of whist.

He did not always win, but by a little luck, and a good deal of skilful play, he managed to secure at least two thirds of the “hand” in which he was engaged.

The Box Trick, which incidentally really made our reputation, took five years to work up. This was 55 years ago. But while it was rumoured that this trick was being prepared, another West-end firm took the idea and invented a disappearing trick which they called the “Maskelyne Box Trick.”

This was then sold to amateurs in shops. My grandfather thereupon sued the firm, and in the law case which ensured they demonstrated how their invention worked. My grandfather lost the case, whereupon he went straight home and with a 7lb axe, smashed up the box which was the product of five years of experimenting in his workshop. He then set out to make another box on a different principle. This took him two and a half years to complete. Nobody knows to this day how the original Box Trick was done. The secret died with my grandfather and Mr. Cook.

Illusionists, conjurers, and card manipulators never can be quite sure that everything is going right when they present a trick. Hence every conceivable mistake must be thought out and rehearsed. This was my grandfather’s great principle; my father followed it, and I make it my guiding rule. But a ready wit is just as necessary.

Bertram, one of the greatest conjurers we have ever had, tells a good story of how he got himself out of an awkward difficulty. He was doing the “rising card” trick, in which three chosen cards are made to rise up out of a glass at command of the persons choosing them.

Again she bade the King to rise, and this time the second Eight of Hearts card rose. Bertram pretended to be very embarrassed. He tapped his forehead as if to say “fool” and produced his magic wand “of course,” he said, “I forgot to give you this.”

Being still a little uncertain about the King, he gave the wand to another lady, who commanded her card, the Nine of Clubs to appear.  Up rose the nine. Then Bertram, certain now that the King was clear, handed the wand to lady number one, who commended the King to rise, with great success.

Everyone thought the ghastly mistake was a clever bit of showmanship, and after that Bertram always had two cards rise out of their order. But mistakes do not always end so happily. One conjurer was doing the “disappearing lady.” He made a great palaver, strode about the stage, waved his wand, and suddenly himself vanished! He has stepped on an insecurely bolted trap used in the vanishing trick. Then there was another illusionist who saw my father’s great levitating trick. The illusionist in question thought he could do the same. He would, he told the audience, levitate a man standing. The man came on – and up rose both men in the air!

The same man had an odd piece of bad luck. He was about to make an omelette by magic, mixing it in a gold ring which he had borrowed from a lady in the audience. This safely accomplished, he turned the omelette in to a dove on which was tied a piece of ribbon containing the ring. It was a striking trick and the audience applauded loudly. But the sudden clapping alarmed the dove, which flew up and out of the open window into the street. The ring went with it.

This was a trifle compared with the mishap which occurred to a conjurer who successfully made a lady disappear from basket. In the midst of his bow to the gratified audience he suddenly saw her roll on to the stage from the back of the basket where she had been secreted.

Also amusing, and perfectly true, is the following little story. In a certain town in the North of England there are two theatres with stage doors opposite one another. A dramatic play was on at one of the theatres, and an illusionist was on at the other.

The dramatic play concerned a girl whose lover was missing, and all through the play she kept on saying “oh I wonder where my darling is!”  At the other theatre the illusionist was doing a trick in which he was supposed to vanish into a cabinet after the latter has been carefully examined, and then, when the cabinet had been opened and found empty, to appear in the balcony firing a revolver and shouting “Here I am!”

One night after being put into the cabinet, he escaped by means of a trick and dashed out of the stage door round to the front of the theatre and up into the balcony. The girl in the next theatre was just saying “Oh, I wonder where my darling is!” when the momentary silence that followed was shattered by half a dozen revolver shots and a very loud voice shouting from up in the balcony, “Here I am!” much to the astonishment of the audience.

Then the illusionist found, to his horror that he was in the wrong theatre!

A performance of mine has been the cause of some interesting and peculiar speculation as to the methods employed. It is a levitation – the first levitation to be done in full view of the audience, and in which the lady is not covered with a cloth. She lies in an imitation stone Egyptian sarcophagus, and is caused to be lifted up straight in to the air.

A man who had seen this performance wrote to me on the subject and asked my word of honour that the women seen to be lifted was the women on the stage. I gave him my word, and he wrote and told me how I did the trick.

“I have worked it out perfectly well.” he said “it is done by compressed air. You pump air through a slot in the bottom of the sarcophagus and she is raised up by the force of the draught.

But it had not occurred to him that a draught sufficient to blow off the roof would be necessary to lift her, and that she would incidentally – and so would I – probably catch a terrible cold and die of pneumonia.

Another member of an audience told me I did this by electro-magnetic induction. But, as a matter of fact, my father worked out that an electromagnet weighing 30lb would be necessary to lift 10 stone one-hundredth of an inch from the floor. Thus, to lift a lady and to balance her between two electro-magnets in mid-air five feet above the ground, the electromagnets would in each case have to be larger than St Paul’s Cathedral.

I am often asked how an illusion is invented. There is no hard and fast method. One fine morning a little idea comes along. Naturally, I welcomed it inspected it very carefully, and-wait. I may have to wait five minutes, or five months, or five years before I can tell the public about that little idea.