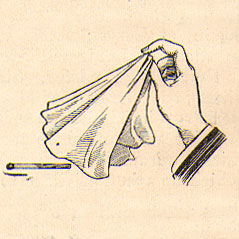 I am indebted to my friend, G. W. Hunter, for the little idea I shall endeavour to illustrate this month. The trick consists of borrowing a match, placing it into a handkerchief and breaking or allowing it to be broken into several parts The handkerchief is now shaken, yet the match is mysteriously found to drop out wholly restored, notwithstanding the fact that the spectator is certain that he broke the match.

The conjurer offers to repeat the trick, and yet again the match is restored. 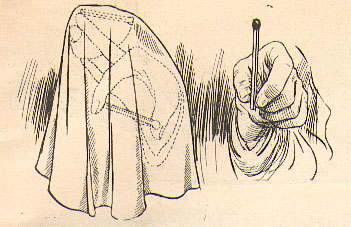 This brings the concealed match into an easy position for the spectator to grasp in the middle of the handkerchief. This trick can be applied to many ideas, for instance, a torn chosen card is dropped into small pill box, and placed under a handkerchief for safety, really a similar box is in the handkerchief, the box containing the card being carried away in the palm of the hand, secretly, and exchanged, at the conjurer’s leisure, for a similar box but empty,this is dropped from the hand on to the table, in the action of shaking out the handkerchief, and the torn card is found to have vanished. 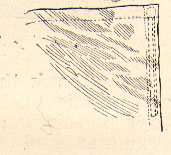