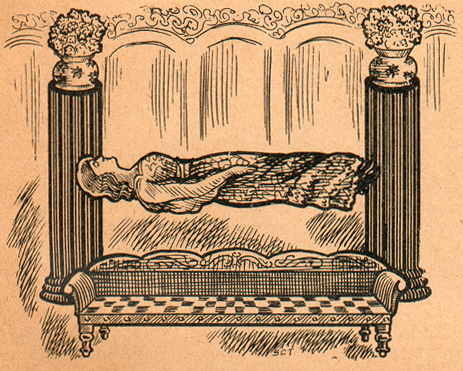 The superb effect of this, the newest “Aga” is unequalled in the annals of conjuring. Not only is it performed in full day light, but it is performed in full glare of the limelight if need be, and is far in advance of any other method, for, not only does the usual levitation and “ring passing” occur whilst the performer is moving about and in front of the suspended lady, but whilst the body is suspended the performer actually leaves the stage entirely, or stands at the wings, and by the motions of his hands brings the suspended lady to rest upon the couch as at first. 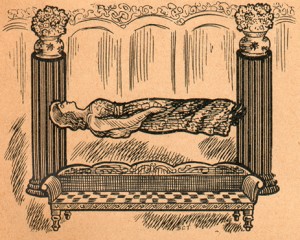 Our Illustrations will make clear how this marvellous effect is accomplished. One of the two pedestals standing at the rear of the sofa is responsible for the “levitation” as seen in the second picture.

As seen in the illustration, disguised, by the ornamentations of the fluted pedestal, part of one of the dark divisions of the latter is actually the lever responsible for the uprising of the lady, which engages with the usual crank grip in the same manner as the upright rod utilised in the older version, but without the necessity for the performers standing
stock still in one position to hide it.

In any position the whole arrangement is absolutely hidden by the lady herself who in this case dispenses with the “lovely flowers” upon her breast which formerly gave her so much the appearance of a corpse prepared for burial.

Having passed the usual hoop over the floating body the performer is, naturally, able to move away from the scene of his weird experiment with impunity, and the couch may be wheeled away until it is required to bring the lady to rest upon it once more. 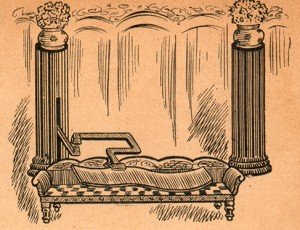 As seen in the illustration the lever is pivoted to swing out of the pedestal upon its own axis, and is operated from below and it is noteworthy that in this method very much simpler mechanism will suffice to produce the illusory effect than would suffice for any other.

As the space within is entirely black no noticeable alteration takes place in the pedestal which bears the appearance of being unaltered, owing to the fact that the open part
of the fluted column seems but a continuation of the black ornamentation of the pedestal.

This greatly improved “Aga” was, I understand, introduced in to England by Mr. Will. Goldston. It would certainly pay any enterprising illusionist to exploit this upon the halls in this country, as its success should be phenomenal.

This article comes out of volume one of the magicians scrapbooks as feaured in The Magician from July 20 1906.