The Secret Of The Indian Rope Trick

Briefly, the effect of the Indian Rope Trick is this:

The conjurer sits cross-legged in an open space. He throws one end of a coil of rope in to the air and about fifteen feet of it (sometimes twenty or twenty-five) remains stiff, like a pole.  A little boy climbs the rope and balances himself at the extremity.
At a word from the conjurer he vanishes, and is discovered in a basket or comes running in to the crowd from a distant spot. Then at a signal, the rope crumples to the ground.

There is a more colourful version than this which insists that the conjurer pretends to be angry with the boy. He climbs up the rope with a knife between his teeth, and on reaching the top both he and the boy disappear.

The most agonising screams are heard from above, then a leg falls, and an arm, another leg and arm together with the remainder of the boy’s body.

The conjurer reappears and climbs down the rope covered with blood. He assembles the limbs and trunk, which at once becomes complete and alive. The rope crumples, and is packed away in a basket.

Now even without this rather horrible embellishment, this is a very wonderful trick. Many a Western magician would give a fortune to know its secret- myself included.

In the past, I have offered £1000 to anyone who could show me the trick under the prescribed conditions, and I willingly repeat this offer here and now. As a spectacle in modern vaudeville the rope trick would be worth no less then £400,000.

Let us, first of all, examine the evidence against the rope trick, the case being that it does not, and never did, exist. 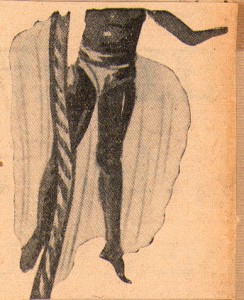 If it does exist, it is worked by methods completed unknown to Western magic and science. There is no known civilised system which will reproduce the illusion as described, even though it be performed in a theatre and not on open ground.

I should add here that two ingenious copies of the rope trick have been performed on the stage by David Devant in England and Howard Thurston in America. In Davant’s version, the “rope” was not really a rope at all, and was standing erect when the audience first saw it. In both stage versions there were several essential differences from the trick as I have described it.

From time to time several famous Western magicians have been to India to investigate the trick. They have not only never seen the trick, but – and this is more to the point- they never met anyone who had seen it.

Such men as Charles Bertram, Murray, Houdini and John Mulholland, the leading magician of the United States, have travelled east of Suez, and come back empty-handed.

Mulholland made careful investigations in to the trick. He searched the Imperial Library at Calcutta for a record of a feast given by the Emperor Jehangir, father of the builder of the Taj Mahal, at which the rope trick is supposed to have been performed.

The document disclosed that the foremost Indian magician of the time (about A.D. 1600) performed at the feast, but there is no word concerning the rope trick.

Another point of considerable significance is that although for many years past Western magicians have offered considerable rewards for a sight of the rope trick (not the secret!), no reward has ever been claimed. And the men who are said to perform the trick are poor nomadic conjurers.

One could quote numerous instances of credible witnesses who have spent years in India, yet who have never seen the rope trick.

Let us content ourselves with the words of Major L.H. Branson, a gifted magician, who spent a quarter of a century in India with the Indian Army:-

“I maintain that the trick has never been performed out of doors. That is to say, that a rope thrown up into the air had not remained suspended in mid-air, nor has any boy ever climbed up it ; that when at the top he has not disappeared , and that after his disappearance he did not come down in bits, covered in blood or otherwise.”

That, then, will complete our case for prosecution. For the defence, we will quote witnesses, though I must stress for the fact that none of the witnesses is known to me.

This is what Sir Ralph Pearson, of Thame, Oxfordshire, England. Says:-

“In the spring of 1900, when in the West Khandesa district of the Bombay Presidency. I saw the trick carried out on the then recently constructed Tapiti Valley Railway….After the necessary shouting and beating of his legs and chest, the conjurer threw up the rope some ten feet in the air, after which the boy swarmed nearly to the top… My wife told me she had also seen the trick done, in company with her brother, his wife and children, at another wayside station further down the line.”

“I was an A.B on board the barque Chili, of Dundee, and while at Calcutta, discharging molasses in January 1898, the rope trick was performed by an Indian (coolie) on the deck of the ship in the presence of the whole crew and with a piece of the ships rope.”

In 1903 the rope trick is said to have been performed before 200 boys on the playing field of the Victoria School, Kurseong, near Darjeeling.

After the performance the headmaster described it as a “wonderful exhibition of mass hypnotism and ventriloquism.” In 1912 it was demonstrated on the parade ground at Malappuram, Malabar.

Other witnesses who contend that the rope trick is not only a reality, but that they have seen it, are Mrs Frances Odhams of Wimbledon; Mr C Whittaker of Lingfield; Mr Maurice Prowse, of Weymouth; and Messrs. Arthur Young, Annaji Rao, and K Mahadevan, all of India.

There are doubtless others whose names and testimony have not been brought to my notice. I am not admitting the evidence of Ibn Batutah, the first man ever to mention the rope trick (AD 1324), whose descriptions are altogether too incredible.

The way is now clear for our star witness. Dr Alexander Cannon, an official of the London County Council mental hospital service, says he has not only seen the rope trick, but that he can perform it.

“I can produce the rope trick in the Albert Hall, London. I shall require a large quantity of sand from a certain area, certain lighting, as it were from the sun, certain heating arrangements, and, under these circumstances, every one can see the phenomenon.”

A group of British magicians expressed their anxiety to see the trick performed by Dr Cannon, and their willingness to assist him in procuring the right conditions at the Albert Hall.

To this offer the doctor answered:-

“Providing you are willing to lay down enough money to bring over a shipload of special sand, to heat up the Albert Hall to tropical temperature, and to produce may own tropical lighting – and also to place with a bank £50,000, to be handed over to me as soon as I have produced the phenomenon, I will do it.”

One feels a little disappointed at this, but worse is to come. The magicians asked Dr Cannon to give them a banker’s guarantee to return the £50,000 and pay all expenses if he failed to produce the phenomenon.

It is stated that he refused these conditions. At any rate, nothing has been done.
So we must despense with this witness. But there is a further piece of evidence that has come to hand in England during the past twelve months.

A magician living at Cheltenham, Gloucester, claims to be able to perform the rope trick. He has performed it several times already, though he has not completely mastered it, and consequently, cannot guarantee success on every occasion.

Held By Wire
As though to consolidate this claim, some photographs were taken of the trick in operation, and widely published in British newspapers.

Let it be said that the photographs – as photographs – were convincing.
I wonder whether, after all, I was going to lose my £1000. But alas! It transpired that the rope was actually held aloft by a wire slung between two trees, quite invisible in the negative.
The business was explained away as a “joke.”

Since cross-examination has dealt somewhat unkindly with the two main defence witnesses, we are left to consider the evidence of others.

What are we to make of these statements? Are the witnesses liars?
Frankly, I do not think they are. What have they to gain by lying?
I think that if it were possible to sift down their evidence, to produce corroborative statements as to time, places and circumstances, we should find there is truth in their words.

The problem is, without the necessary corroboration, to decide what degree of truth there is in them. In conditions of extreme heat such as exist in India, delusion is not uncommon.

I am not suggesting that it is possible to imagine the rope trick being performed where nothing was performed at all. But I do believe – indeed, I know – that one can imagine one sees much more than is actually happening.

Rod Theory
That, at any rate, is my own explanation of these statements. I think it possible that at the stated dates and places some version of the traditional rope trick was performed.
Probably a bamboo rod, covered with rope, was made to stand n the air. If so I think much of the rest was hallucination, including probably by atmospheric conditions, and the distance of the witness from the performer.

At any rate there is no denying that the weight of scientific evidence – and, for that matter, common sense – is heavily against the rope trick.

Lastly, I might say I do not believe in the theory of mass hypnotism. In my earlier days, I did a good deal of hypnotism, and my experience has shown me that the hypnotising of a single subject is difficult enough, and sometimes quite impossible if he or she is unwilling.

I have never met a hypnotist who was capable of influencing two persons simultaneously, let alone a crowd. If one may be permitted the use of the word impossible, it is surely applicable here.

Many wonderful things have been brought from east of Suez, but I have yet to be convinced that mass hypnotism and the true Indian rope trick are among them.

This article features towards the back of volume two of the scrapbooks, from a series of articles entitled Men of Magic, this being number six. Presumable written by Will Goldston early 1930’s